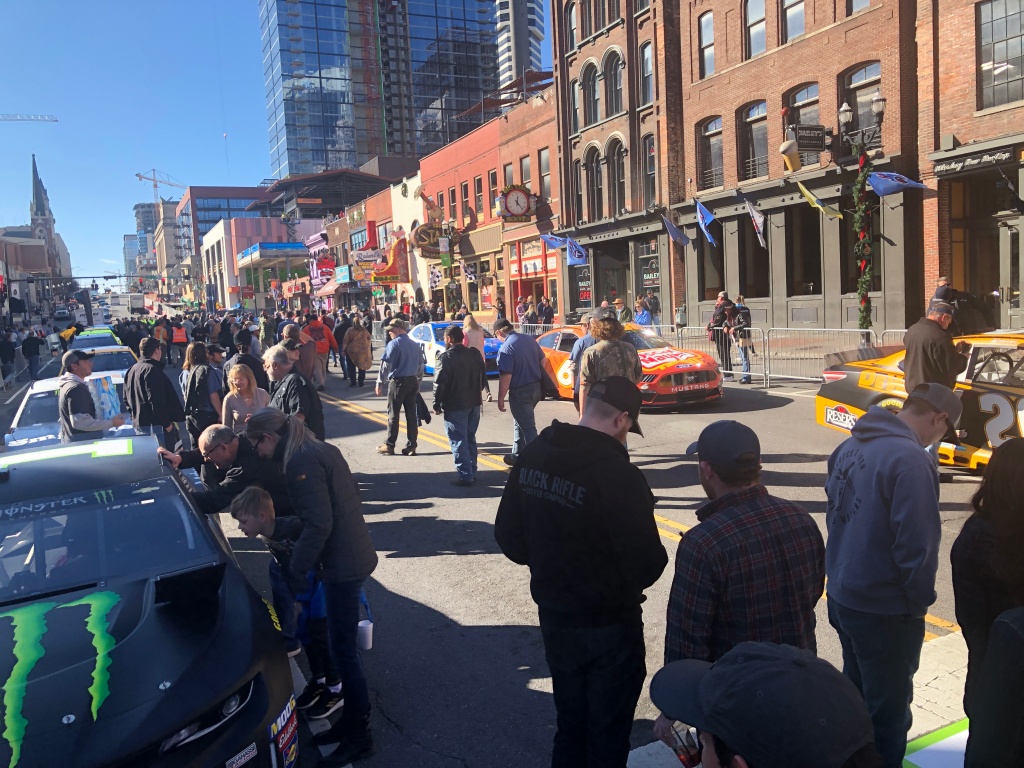 I’ve been on vacation this past week, and although I’m fighting a neck/back issue, we still got out and did a few things. While this will stray a bit from the usual road trip entry, I thought we’d wrap the highlights from the entire week into a single entry.

First up, and this actually happened the night before Thanksgiving, someone in our household had a close encounter with a deer. Our van is drive-able while we wait for an estimate, but I had to get creative with removing a few parts in order to keep things from getting worse. You sure get a few interesting looks on the road. Also gave me a good opportunity for fun when I used valet parking this week. I found a tiny scratch on the front bumper, and told them that I knew that wasn’t there when we arrived. They didn’t seem nearly as amused as I was.

Tuesday, Nathan and I took a trip up to Indianapolis. We planned to just check some things out from when we lived there, and maybe visit the speedway. We stopped in Shelbyville so I could show him the hospital he was born in. For some reason, the hospital was leveled a couple of years ago, and they have left a grass field in the middle of town. I pivoted quickly, and told Nathan to take a look at the field he was born in. He had a lot of questions, LOL.

From there we drove up to Greenfield, and stopped into see my buddy Tracy Neal at Four Sharp Corners, which is a card and coin store. I haven’t seen Tracy in about three years, yet we picked up conversation like I had just been in there the day before. We talked for about an hour or so while Nathan looked through all the cards. We left with several interesting items just so I could break up some packs, it’s fun just to look through cards of players I watched as a kid. If you’re ever in the Indianapolis area, check him out!

The next day, I had to have Adam downtown for an appointment, and we managed to stop off for a few minutes and check out the NASCAR Champions week activities going on here. They had the 16 playoff cars lined up on Broadway in preparation for the burnout competition later that night. We got a few good pictures, as well as a video of Kurt Busch’s car getting warmed up.

From there we went over to his appointment, and when we arrived we discovered that the Budweiser Clydesdale hauler was at the hospital so that kids could see the horses.

Last night, I was opening a few other packs of old baseball cards I had, and opened a few packs of Topps Baseball Cards from 1988. Now, if anyone remembers the old Topps cards, you’ll remember that they each came with a stick of gum. And it was terrible, even then. So, Nathan and I decided we should see what 31 year old bad gum would be like. I have nothing positive to report at all, but can tell you that it no longer has the ability to be chewed and be stuck together. Ugh.

Tonight I’ll be looking through a box of 1991 Maxx NASCAR cards I picked up at Tracy’s shop. According to the box, I can win two tickets to the 1992 NASCAR All Star Race. That is one of the most iconic races in NASCAR history, first speedway night race, and the winner wound up in the hospital instead of victory lane. I hope I win those tickets, I’d love to see that race in person!