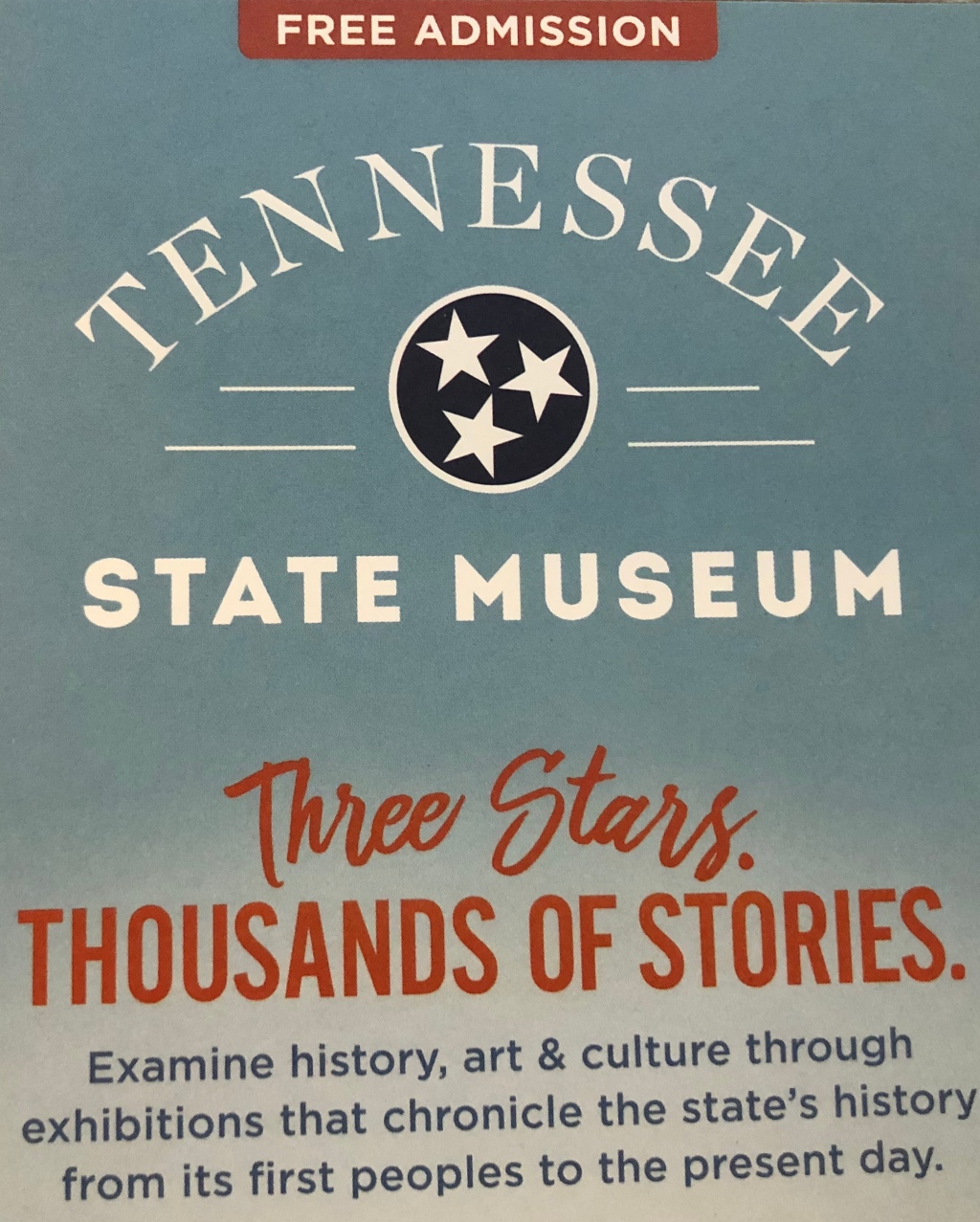 A couple of weeks ago, Adam and I went to the Tennessee State Museum in Nashville. The museum is located just north of the Farmer’s Market, at 1000 Rosa L. Parks Blvd. The facility is relatively new, as they used to be in a different building downtown. Once you park, you can easily visit the Farmer’s Market, Bicentennial Park, and the Museum. If you go on a weekend, get there very early, as parking fills up quickly.

When we arrived, we initially went over to Bicentennial Park, as the museum had not opened yet. The park is a large mall that extends down to the State Capital. The mall has a granite timeline wall that traces two hundred years of Tennessee History, from 1796 to 1996. As you walk along the wall, there os a large marker on the opposite side marking each 10 years, evenly spaced apart. Below are a couple of pictures we took of interesting road trip related facts, including the first concrete highway, and the start of the Great Smoky Mountains NP.

Also along the walkway, there is a special area dedicated to Tennessee’s contributions to WWII, as well as a ‘Star’ gallery at the end honoring Tennessee’s musical artists. From there, we took a picture of the length of the mall up to the Capital Building, although the sun made the picture tricky to get.

From there, we crossed the street to the museum, which you can see below. There is an outdoor on the second floor behind the columns to the right. Once you get up there, you will find rocking chairs, you can view the entire park and south into the city. It was a great view.

You’ll enter the ‘Grand Hall’ on the first floor, where they have an information desk, as well as a museum store. There is also a Children’s Gallery and education areas on this floor. Upstairs, there are several temporary exhibit galleries, and the Permanent Exhibition, the Tennessee Time Tunnel. The ‘Tunnel’ connects you to six different areas that tell the history of the state. You’ll start out in the Natural History section, then go to First Peoples, which focuses on the year 13,000 BCE to 1760 CE. From there is’s on to Forging a Nation (1760-1860), Civil War and Reconstruction (1860 to 1870), Change and Challenger (1870 to 1945), and finally Tennessee Transforms (1945 to Present). There are some amazing artifacts located in each area, below are a few pictures we took of our favorites.

A display case about farming in east Tennessee, with artifacts from families on Grainger County, where my ancestors lived up until the 1920s.

Next up was some Cold War era items, a Geiger Counter, a Fallout Protection booklet, and a drum of Drinking Water. These items were also pretty important to Tennessee with the work being done in Oak Ridge.

They have the original sign from the Ernest Tubb Record Shop on Broadway in Nashville.

And they also had several artifacts from famous Tennesseans. Below you will see a stage outfit from Dolly Parton, a suit from Johnny Cash, helmets from Bobby Hamilton, a basketball uniform from the Memphis Grizzlies, a sweater and shirt from Pat Summitt, and a flight suit from Barry Wilmore, a NASA astronaut and graduate of our hometown Mt. Juliet High School.

And to me, the highlight was something that wasn’t related to Tennessee, but was another reminder of the tragedy that was 9/11. They have a file cabinet drawer that still contains files from the World Trade Center. Obviously damaged and partially burned, it’s incredible to think about where this might have been in the building, who may have used it, and what outcome did those individuals have. We truly need to make sure we Never Forget.

We had a great time at the museum, and you will too! Make sure you visit the next time you are in Nashville. Did I mention it was free!

For more information, their website can be found here.