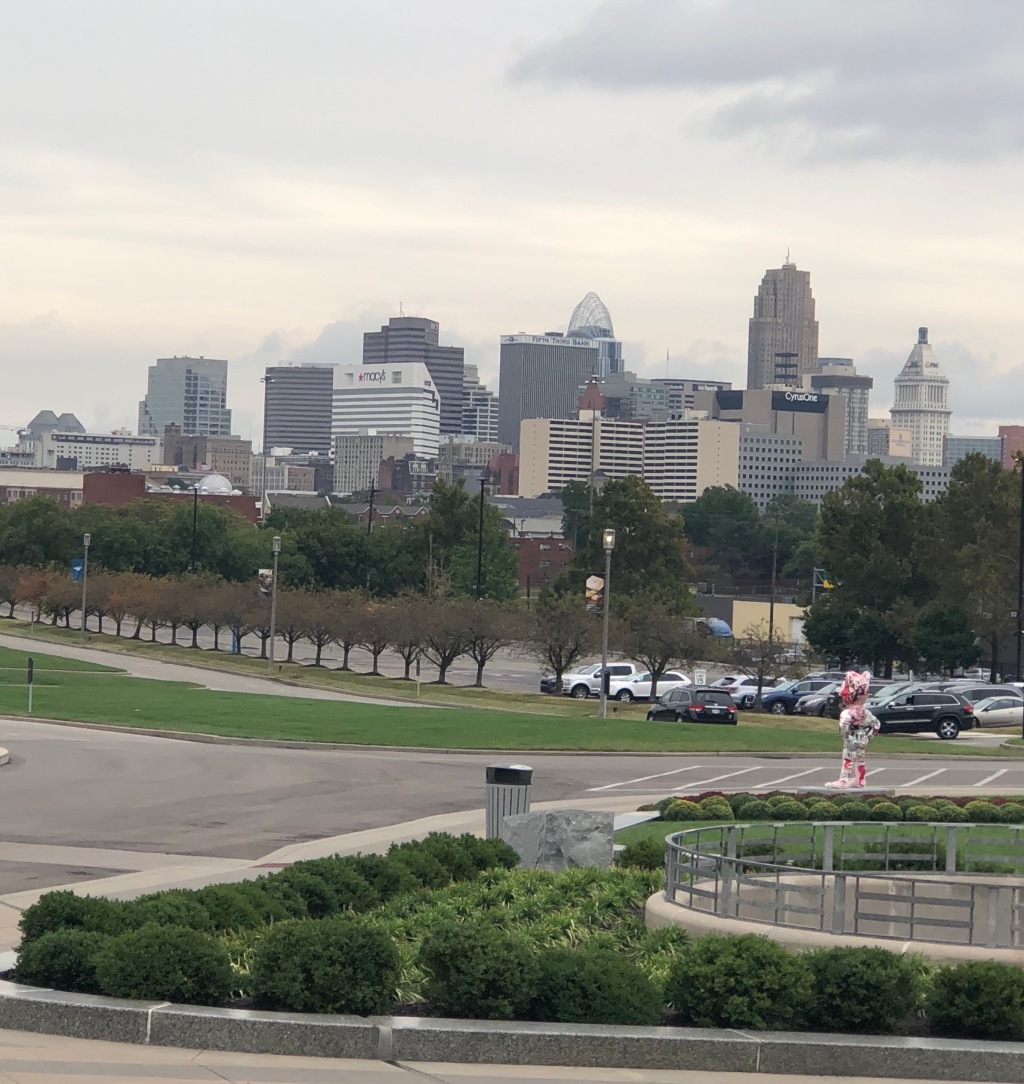 Last Sunday we headed to my hometown, Cincinnati to visit the Cincinnati Museum Center. There is currently a traveling exhibit from the Smithsonian at the CMC, to celebrate the 50th anniversary of the moon landing. It was a two day trip, and was pretty unique, as most of our family travelled together. With five of us in the house working, it gets difficult to all get time off together. This time everyone except our oldest son was able to go, and the kids were really excited to visit their grandparents, who went to the museum with us! For me, the museum was awesome and amazing, but the most important part was getting to spend time with Dad, as we don’t get enough chances to spend time together. What’s important for you to know is that in addition to all his great qualities, it was Dad who instilled in me the love of travel, and most importantly, travel planning. With that said, I wanted to make a couple of stops on the way back home, at places that I have either never visited, or that it’s been a long time since I have seen.

First up was a stop at Cave Hill Cemetery in Louisville, KY. Cave Hill is a very historic cemetery, lot’s of very very old and ornate markers on the graves. We specifically stopped to see two very famous graves, and were able to easily locate them using the ‘Find A Grave’ app on our phone.

Next up was Muhammad Ali, Heavyweight Champion of the World! While I was sad we didn’t see any floating butterflies, at least we were not stung by any bees:

Next up was a stop at Big Bone Lick State Historic Site. Big Bone was a site of several archaeological expeditions, including separate ones by both Lewis and Clark four years apart from each other. The land in the area is high in salt content, so many ancient mammoths would visit the area to lick the salt, which is why so many of their remains have been located there. They also currently have a herd of bison on site, which you are able to take a short walk to and observe. (Hat tip to the kids for the pictures of the bison, this wooly mammoth didn’t feel like walking out to them!)

The museum complex in Cincinnati is located in Union Terminal, an art-deco train station originally opened in 1933. The building has survived a lot through the years, and is currently coming back to life after a 2 1/2 year restoration period where they have cleaned, repaired, and restored the facility back to its original beauty. Inside there are permanent exhibits dedicated to Natural History, Cincinnati History, Space Exploration, The Holocaust, and The Children’s Museum, as well as an Omnimax Theatre.

The traveling Apollo 11 had timed tickets, so we started our visit in the Natural History portion of the museum. We then visited the Space section and the Apollo 11 exhibit. We then went through a portion of the Cincinnati History section, and then went into the Omnimax film about Apollo 11. The Apollo 11 exhibit was amazing, they have the command module Columbia, as well as Buzz Aldrin’s gloves and helmet, and many other artifacts. Seeing the command module was fascinating.

The Omnimax film was the ‘must see’ portion of this visit. The film was just over 40 minutes long, and was entirely made up of footage taken before and during the mission. Included was film of mission control, in the capsule, on the moon service, and even the ride up the elevator to get into the capsule for launch. If you are anywhere near Cincinnati prior to the exhibit ending on 2/17/2020, you must see the exhibit and watch the film.

On the drive home, had a very sad memory. Just past the Carrolton exit headed south on I-71, there is a sign on each side of the interstate that says simply, ‘SITE OF FATAL BUS CRASH MAY 14, 1988’. Most people who pass through there probably have no idea what that means or what the significance of the event was. I was just a few days shy of turning 12 when this happened, and our local news covered the accident that night, and I’ll never forget the tragedy. A church from Radcliff, KY had sent 66 people from their congregation, as well as a bus driver on a trip to Kings Island north of Cincinnati for a day trip. Of the 67 people, only 5 were adults, the rest were teenagers. Sometime just before 11pm that Saturday night, a drunk driver on the wrong side of the interstate slammed into the bus, hitting in an area of the front that contained the gas tank. The bus caught fire, and the only exit was the rear door, which had been partially blocked by a cooler. Only 40 of the passengers made it off that bus before it burned completely. By the time rescue services arrived, 27 passengers had already been burned to death, as no one was significantly injured from the initial impact. Of the survivors, only 6 were not seriously injured or suffered burn damage. All suffered mentally from the trauma of the crash. The crash caused a number of laws to change regarding the use of old school buses. The drunk driver somehow wound up only serving 10 years and 11 months and is still living near the crash site.

For me, it will always be one of those ‘etched in stone’ moments, where I’ll remember where I was and watching the coverage. Truly one of the saddest things I have ever seen.